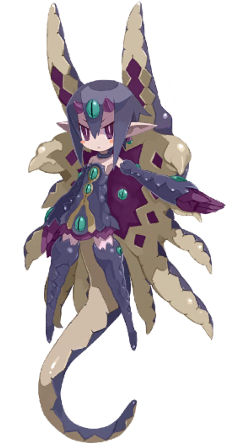 Lovecraft has never been so adorable.
Dr. Ray Stantz: I tried to think of the most harmless thing. Something I loved from my childhood. Something that could never, ever possibly destroy us. Mr. Stay Puft.
Dr. Peter Venkman: Nice thinking, Ray.
— Ghostbusters
Advertisement:

Eldritch Abominations are terrifying, incomprehensible, and just plain wrong (the clue's in the 'abomination' bit). There are very few people who'd cuddle up to Cthulhu, or sit down to a nice family viewing of My Neighbor Tsathoggua. There are some works, though, that prefer to make these soul-eating horrors from beyond space and time... kind of cute, actually. Maybe you want to add a little extra spice to your Magical Girlfriend show. Maybe you're really, really into Grotesque Cute, and want to extract humour or horror from the dissonance between your beastie's appearance and what it does. Maybe you want to tone down the horror in order to avoid traumatising and depressing the audience. Maybe you just feel that the various unknowable god-things that crawled from the Cthulhu Mythos got an unfair rep for their unfortunate little habit of visiting death and insanity on entire worlds, and you want to redress the balance. Whatever the case, you've now got one of these.

A helpful answer to "why" for Did You Just Romance Cthulhu?. See also Cute Is Evil and Creepy Cute. Can overlap with Killer Rabbit. Usually a result of Cute Monster Girl and/or The Taming of the Grue. Might overlap with Humanoid Abomination. Compare/Contrast Eldritch Abomination.