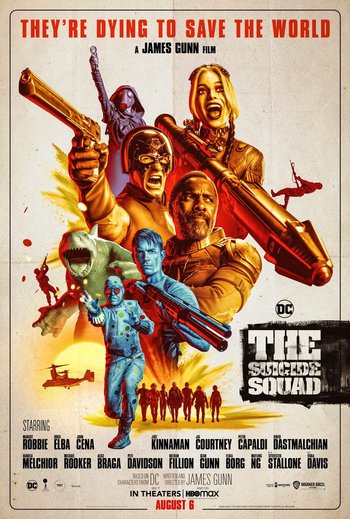 Don't get too attached.
"You know the deal: Successfully complete the mission, you get 10 years off your sentence. You fail to follow my orders in any way, and I detonate the explosive device in the base of your skull."
— Amanda Waller
Advertisement:

The Suicide Squad is a 2021 ensemble superhero Science Fiction war Black Comedy film written and directed by James Gunn, based on the DC Comics title of the same name. It is the tenth installment of the DC Extended Universe, serving as a standalone sequel and Soft Reboot to 2016's Suicide Squad.

Set after the events of the first film and Birds of Prey, the plot follows a new iteration of Task Force X / "The Suicide Squad", a collection of Boxed Crook Supervillains offered a simple deal by high-ranking government official Amanda Waller (Viola Davis): have a bomb temporarily placed in the base of their skull to assure they don't try to escape and take on an increasingly deadly series of Suicide Missions in return for having their prison sentence reduced after each success. Their mission today? Survive being dropped onto Corto Maltese, a remote island filled with criminals and soldiers all guarding a massive secret that could spell doom for the entire world. Also, don't get too attached, because not everyone's gonna make it.

The film was released on August 5, 2021. Like its predecessor Wonder Woman 1984, it (along with the rest of Warner Bros.'s slate for 2021) received a same-day release on HBO Max and theatrically where available.

Ahead of release, in September 2020, it was announced that Cena's Peacemaker would be starring in a spin-off series on HBO Max, also written and directed by Gunn. Gunn later confirmed that he was developing another spin-off for HBO Max near the end of the first season of Peacemaker.

open/close all folders
Tropes A to F
Tropes G to Z
♫ I'm a fool to do your dirty work, oh yeah... ♫
Feedback