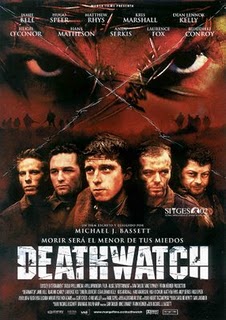 Deliver them from evil.
Advertisement:

British war horror movie made in 2002. It was the directorial debut of M.J. Bassett, who later went on to direct the movie Solomon Kane and starring Jamie Bell and Andy Serkis.

Set during World War I, a group of British soldiers "go over the top" in an assault against German lines. However, in the middle of the battle, a mysterious fog descends upon the battlefield and the night suddenly turns into day. Hours later, they finally stumble upon the German trenches only to find a mere 3 German soldiers, petrified and pointing their guns down their own trenches. The British soldiers call for them to surrender, but the Germans are more scared of something in the trench than them. After murdering two of them and torturing the third, the British troops begin exploring the trench, only to find the bodies of more Germans, seemingly killed by friendly fire. Even stranger, the trenches seem to lead nowhere, simply doubling back on themselves. With a prisoner babbling about demons, impenetrable fog, and a broken radio, they quickly form a defensive position and wait for reinforcements that never come.

Though their radio can't send messages, it can still receive them. High command seems rather sure that the attack failed and there were no survivors....

Needless to say, things go downhill from there.