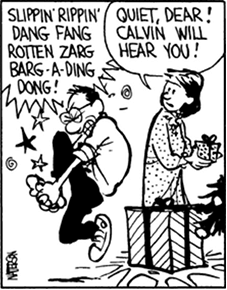 Hurt Foot Hop is a trope particular to Amusing Injuries.

A character is minding his own business and someone (or himself) drops something heavy on his foot, or he's angry about something and kicks the source of his frustration a little too hard. Or she's angered a cute kid and the kid kicks her (in the shins/stomps on her foot). Or there's a misstep, resulting in a stubbed toe... Or you stepped on Caltrops or something else sharp on the floor... you get the idea.

Whatever the situation, the result is the same. The character in question ends up hopping on one foot while clutching the other one, shouting in Angrish for a few seconds to indicate their pain.

The foot is considered one of the body's more vulnerable areas and foot injuries happen often enough in real life to be relateable in fiction, and while they can be extremely painful, they're hardly ever life threatening (unless infection follows). Can occur before, while, after, directly as a cause for, or as a result of Losing a Shoe in the Struggle.

Primarily an Animation Trope, but has been known to turn up in other places. A standard element of innumerable silent-era comedies, and classic sound-era comedies.

Larry can attempt to pick up a dumbbell, but it ends up landing on his foot and he hops from the pain.

Larry can attempt to pick up a dumbbell, but it ends up landing on his foot and he hops from the pain.