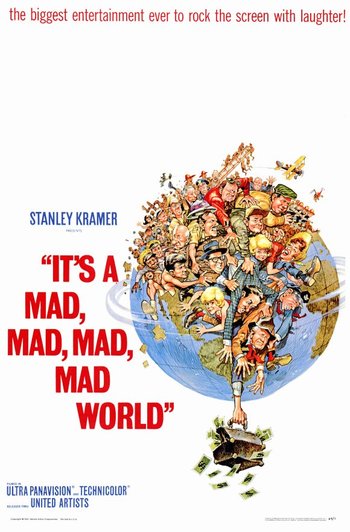 When aging criminal "Smiler" Grogan (Jimmy Durante) sails his car off a cliff in the Mojave Desert, he gives a Final Speech to the various strangers who gather around him, informing them as to where to find $350,000 in cash,note Approximately $2.932 million in 2020 money hidden loot from an old robbery. He then kicks the bucket— figuratively and literally. After a spirited "negotiation" session regarding the allocation of said money breaks down, the witnesses decide to race each other to Santa Rosita State Park, where the loot is "buried under a big 'W'"... each now hoping to find it and keep it all for themself.

The initial racers are:

Before long, all these characters are in deep trouble. The Crumps get locked in a hardware-store basement, and set it on fire trying to escape. Benjy and Dingy have to fly and land a plane after its inebriated pilot (Jim Backus) knocks himself unconscious in midair. Pike demolishes a gas station after Meyer tricks two attendants into attempting to tie him up. Meyer accidentally drives into a river. Mrs. Marcus starts multiple fights.

Meanwhile, the police are monitoring all this, and betting on who will win the race. The Santa Rosita police chief, Captain Culpeper (Spencer Tracy), intends to confiscate the stolen money after it's found and presumably return it to its rightful owners, but after being buried under an ever-increasing mountain of bad news from his homelife and regarding his police pension (or lack thereof), he devises A Simple Plan to get the dough for himself and skip on down to Mexico for his "retirement".

Not to be confused with MadWorld by any means. You are, however, allowed to confuse it with its '00s Spiritual Successor, Rat Race.