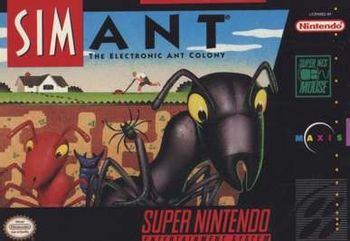 "Few ant colonies last very long, but maybe, with your help, this one will survive."
—the introduction to SimAnt on the SNES
Advertisement:

SimAnt is a 1991 Simulation Game in which you control an ant colony by manipulating pie charts and selectively controlling the actions of individual ants whom you choose (e.g. moving the queen out of danger or leading a group of other ants into battle as a member of the soldier caste). The objective is genocide: kill the red ants, and then drive out the humans and take over their house, and you win. Originally a computer game published for MS-DOS, Amiga, and then ported to Windows, the game was also given a console port on the Super NES.

Compare this to more modern ant games, such as Empire of the Ants and Empires of the Undergrowth.