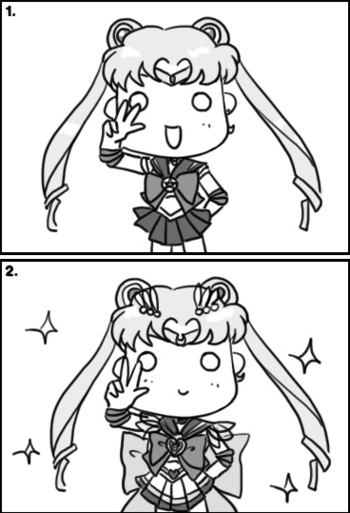 "A magical girl doesn't get to choose her costume, of course. Still, the two tend to suit each other. [...] While the general design will stay the same, elements of the costume might evolve slowly over time, or suddenly with big life changes. Changes like this always get discussed extensively in the tabloids."
— Anemone, Sleepless Domain
Advertisement:

You're a Magical Girl Warrior or two or five, huh? And you've made it to a second season and powered up accordingly? You've got to show it. But your old costume is too useful, too iconic and just too cute to get rid of. Get a Frilly Upgrade!

Magical girls' powerup outfits are easy to tell from their originals, because the original always looks plainer. The more seasons that the show goes on, the more jewels, ribbons, frills, lace, bows, hair clips, tiaras, fur trim, feathers, and even wings will be added to the uniform. This goes double for the leader, who has to look unique and special anyway. Still, there comes a point where it can't possibly be useful anymore. (Just imagine if Sailor Moon had gone for five more seasons

This probably stems from the target audience's idealization of princesses and fancy clothes. After all, the traditional Magical Girl story is aimed primarily at young girls, and operates on high levels of Wish-Fulfillment.

Contrast their Evil Counterpart, Evil Costume Switch, which changes frills out for leather or Spikes of Villainy. Goes quite well with a Power Crystal accessory. Compare with: Next Tier Power-Up, the approach more common in Shonen works; Mecha Expansion Pack, the Humongous Mecha equivalent; and Rainbow Pimp Gear, when you're in a video game and this trope is invoked by the player because the frillier pieces have better stats.

A Sub-Trope of both Frills of Justice and Costume Evolution. Compare Pimped-Out Dress, which this frequently results in.