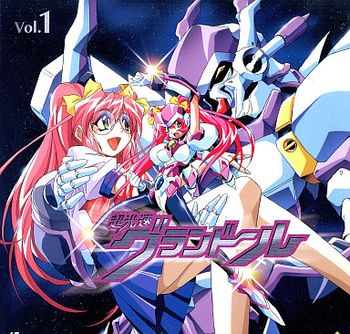 Well okay, there's a little more to it than that.

Hyper Speed GranDoll (超光速グランドール, Chō Kōsoku Gurandōru) is a three-episode OVA from 1997 about Hikaru, an Ordinary High-School Student who is shocked to discover that she's actually the long-lost princess of a faraway planet. Now she must transform into the chosen warrior, Grandoll, in order to protect the Earth from villainous alien invaders and prevent her Powered Armor suit from falling into the wrong hands.

A Japan-only PlayStation game based on the OVA was released shortly after, which is a side-scrolling action platformer similar to the likes of both Metroid and Mega Man and that the game's plot closely follows the OVA's storyline, with the exception of a few minor differences. In addition to this and whereas in the anime in which Hikaru only fights in her standard armor, she gets multiple different styles of armor upgrades after defeating a boss, similiar to Mega Man ZX's Bio Metal System.