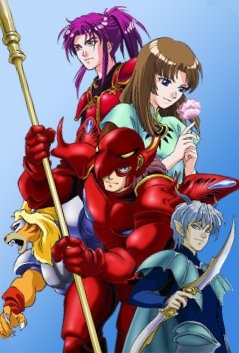 Mushrambo, also known as Shinzo, is a 32-episode Shōnen series produced by Toei Animation and was broadcast on TV Asahi in 2000.

Saban Entertainment licensed the series and aired it on Fox Kids in 2002 note  Though they only aired the first 17 episodes and in 2005 later aired in reruns on Jetix where the series finished its run internationally.

In the 22nd century, humankind was wiped from the face of the Earth by their own genetically engineered creatures called enterrans/matrixer. As man’s defeat approached, one scientist, Dr. Tatsuro, placed his daughter, Yakumo, into suspended animation with hopes that when she awoke, she could reach Shinzo/Center, where the last humans are supposed to be.

She awakens 500 years in the future (300 in Japanese) and begins her journey in search for Shinzo/Center to save the humans and bring peace between them and the enterrans. Along the way, she befriends three enterrans who vow to protect her, Mushra, Saago, and Kutall. With a price on her head and a group of villains after her, they do quite a lot of protecting.

The show tends to be more about the battles with the three enterrans each having their own Super Mode (later with wings) and are even able to combine into the legendary Mushrambo.

The adaptations differ per country, but all tend to follow the general travel-and-battle Shonen plot.