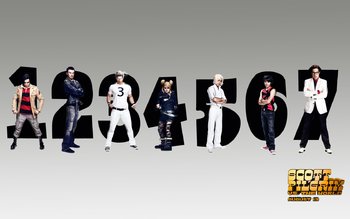 Seven antagonists to defeat.
"The Norse had seven sleepers. The Blackfoot, seven stars. As a boy, I heard the legend of the seven bells. All these stories are the same."
— Reginald Hargreeves, The Umbrella Academy (2019)
Advertisement:

Right after three, seven is the most commonly used "meaningful" number in fiction. This can be traced back to the ancient times; just think of the Seven Wonders, the Seven Days of Creation, or the Seven Hills of Rome. It is also common in many fairy tales.

In the natural world, one of the origins of this significance comes from the seven celestial bodies that could be seen with the naked eye, (Sun, Moon, and the planets up to Saturnnote If the motion of Uranus had been noticed, the lucky number would likely be eight instead), that were worshiped as deities, and the days named after them were the days of the week.

Later, natural phenomena were intentionally shoehorned into this "significant" number, for example the colors of the rainbow and the number of continents can be seven, depending on how you count them.

Since The Bible, especially the Book of Revelation, uses it repeatedly, seven became even more famous as a divine number, or as the number of perfection.

Lucky Seven is a subtrope about examples where it is considered a lucky number. Also see Magical Seventh Son, The Magnificent Seven Samurai, Seven Deadly Sins, and Seven Heavenly Virtues.