Literature / The Giant Who Had No Heart in His Body 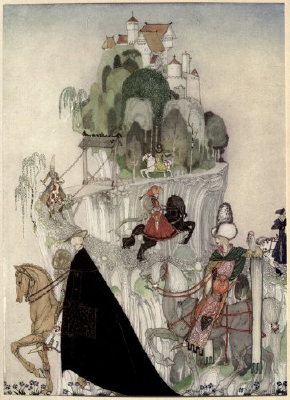 "The six brothers riding out" by Kay Nielsen
"Far, far away in a lake lies an island; on that island stands a church; in that church is a well; in that well swims a duck; in that duck there is an egg, and in that egg there lies my heart, — you darling!"
Advertisement:

The Giant Who Had No Heart in His Body is a Norwegian Fairy Tale collected by Peter Christen Asbjørnsen and Jorgen Moe.

A king had seven sons and loved them so much he always had to have one of them by him. One day he sent the six older ones out to find brides, and directed them to bring back a seventh for their brother. They met a king with six daughters, and the princesses were so lovely that they forgot their brother, but when they returned, they passed too closely by a giant's home, and the giant turned them all to stone.

When his brothers did not return, the king wanted the youngest to never leave, but the prince finally persuaded him and set out. He gave a raven his food, helped a salmon into the river again, and gave a starving wolf his horse to eat on the condition that the wolf be his steed instead and help him. The wolf brought him to the giant's house, showed him his brothers and their brides, and told him to go inside the house and do what the princess in there told him to do.

The princess warned him that the giant did not keep his heart in his body and so could not be killed, but had him hide and begged the giant to tell her where his heart was. He claimed it was under the doorstep, but when she and the prince dug there the next day, they found nothing. The princess then adorned the doorstep with flowers and told the giant it was to honor the place where his heart lay. The giant then told her it was in the cupboard, which was the same, and the princess strewed the flowers again. Finally, he tells her: ''"Far, far away in a lake lies an island; on that island stands a church; in that church is a well; in that well swims a duck; in that duck there is an egg, and in that egg there lies my heart, — you darling!"

With the help of the wolf, the raven, and the salmon, the prince gets the heart. He squeezes it and demands that the giant restore his brothers and their brides; then he squeezes it in half and kills him. They all return to their father, and the youngest prince marries the princess who was the giant's captive, and the most beautiful of them all.

Compare to Russian fairy tale Tsarevich Petr and the Wizard.