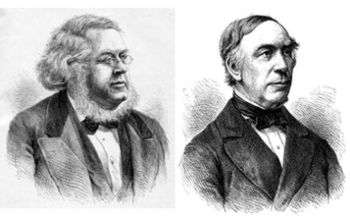 Asbjørnsen & Moe
"The Norwegian folk tales are the best there is... they surpass almost any other."
— Jacob Grimm
Advertisement:

Authors Peter Christian Asbjørnsen and Jørgen Moe were a pair of Norwegian Fairy Tale collectors. The result of their work is an anthology of roughly 150 tales, properly called "Norwegian Folktales", but more commonly referred to simply as Asbjørnsen and Moe.

Peter Christen Asbjørnsen was the urban one, born in the city of Christiania in 1812. He died in 1885, a vivid hobby scientist and professional zoologist, engaging in social issues, and in collecting of stories. Most of the material collected in and around the Oslo area is written by him, and also many of the legends. Asbjørnsen was the son of a glass maker, and had humble origins. He wrote and edited his own collections of stories before even meeting Jørgen Moe as early as in 1842. In later years, Asbjørnsen ended in a heavy porridge debate (called the "porridge war") with sociologist Eilert Sundt, over the necessity of eating and making porridge. Hilarity ensued.

Jørgen Moe was the son of a farmer from Ringerike, born 1813. He was the rural one of the two. He studied to become a priest, and was also a poet and writer of children's books. Many of the dialect examples in the texts are his, and also the more lengthy tales from the upper valleys. He sought out story-tellers in remote areas, and collected some of the more rare and extensive tales from them. Regrettably, he was not always there for long, but he laid out some ground work for the next generation of collectors. His son, Moltke Moe, became the first professor of folklore in Norway. Moe had a chance meeting with Henrik Wergeland in 1841, and Wergeland insisted that he should get to the task of collecting more thorougly. In time he became a respected priest in the parish of Krødsherad, and from there, he was able to collect more stories. Jørgen Moe died in 1882.

The "classical" mode of telling the stories derives from the mode of some particular storytellers in the eastern parts of Norway. Folklorist Rikard Berge commented later on that the western modes differed somewhat from the Asbjørnsen/Moe style, and this, he argued, showed some local characteristics in how to present the characters. The "eastern" ashlad is more of a witty trickster, while there is more of a heroic youngster in the "western" one.

The vast majority of these tales originate from three earlier anthologies:

A handful of other tales by Asbjørnsen and by Moe's son, folklorist Moltke Moe, have also made their way into the collection.

Tales with their own page:

A partial translation can be found here

J. R. R. Tolkien singled this one out for discussion in "On Fairy-Stories" when discussing What Do You Mean, It's Not for Kids?: though the translator did not bowlderize, he did forbid children to read the last two stories, under the assumption that they were the natural audience.

Examples of tropes in Asbjørnsen and Moe's folk tales that don't have their own page: