Literature / Tsarevich Petr and the Wizard 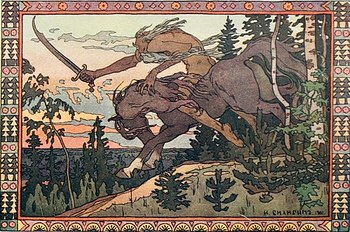 Koschei the Deathless by Ivan Bilibin
"Know that my life is in neither the broom nor the hedge, but is in an egg. The egg is in a duck, and the duck is in a hare, and the hare nests in a great hollow log that floats in a pond in a forest of the island Bouyan"
— Koshchei the Deathless
Advertisement:

A Tsar and his Tsaritsa have three sons, Alexei, Dimitri, and Petr. One day, the Tsaritsa vanished while walking. His advisors conclude that she was kidnapped by Koshchei, the most powerful of all the wizards, and advise him to marry again. Instead, he offers anyone who sets off after her anything they need. After many heroes have tried and failed, the Tsar tells his sons that they must go.

Alexei took gold and a troop of soldiers, but he lost the men one by one until he had only ten. Then he met an old man who told him he would not reach the castle of Koshchei because there were three rivers, and the ferrymen demanded high tolls. Alexei scornfully said he had money enough, and reached the first ferryman, who frightened off his remaining men, and demanded his right hand. Alexei allowed it but when he reached the next ferryman, he panicked and returned home.

Dimitri went after him, and even got to the second ferryman, who demanded that he let him cut off his left foot, but then, he panicked at the third ferryman.

Petr, however, went with only a horse and a sword. He chose the sword by testing all the swords for a month, and the horse by having them all driven into the sea and picking the one that swam the farthest and wrestled with the waves. Then he rode off. He was polite to the old man, who thought he might reach it, and told him how to get in. When he met the ferrymen, he demanded that each one ferry him before getting the price, and then killed them on the other side. He then climbed the mountain with iron claws, as the old man had said. Then he found a castle of copper, with a stolen princess, spinning copper, who could only direct him onward, to the castle of silver. There, a princess sent him onward to a castle of gold. There, a princess sent him to a fourth castle, of pearl, where his mother was.

His mother tried to trick the knowledge of where his heart was from Koshchei. When he lied and claimed it was in a broom, she had it decorated with gold, and then the same with a hedge. Finally, he told her "Know that my life is in neither the broom nor the hedge, but is in an egg. The egg is in a duck, and the duck is in a hare, and the hare nests in a great hollow log that floats in a pond in a forest of the island Bouyan".

Petr set out backwards to find it. He rescues a salmon, a hawk and a bear along the way. With their aid, he deals with the animals and returned with the egg, and killed Koshchei with it. Then he brought back his mother and the three princess, marrying the princess of the golden castle himself and having his brothers marry the two others.

Compare with The Giant Who Had No Heart in His Body and /The Death of Koschei the Deathless.