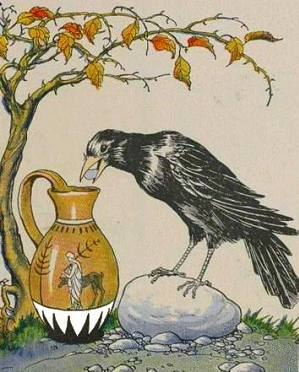 "If men had wings and bore black feathers, few of them would be clever enough to be crows."
— Henry Ward Beecher
Advertisement:

Crows and ravens (both corvids, as are magpies, jackdaws, rooks, jays, choughs, treepies and nutcrackers) have both positive and negative associations, but few would quibble with the notion that they are clever creatures.

Although it can be hard to tell what species a particular corvid is meant to be in many visual media, heroic ravens are often wise or intelligent characters, while crows tend to be friendly tricksters or Plucky Comic Relief. For example, crows (never ravens) are a staple of The Golden Age of Animation, appearing in countless funny cartoon shorts set on family farms, where their role is to drive farmers nuts gobbling up their corn crops. These cartoon crows aren't the slightest bit scary, though they can certainly be annoying to the farmers (and the occasional living scarecrow). They tend to be tricksters.

Corvids often have been portrayed as sentries or lookouts, sometimes with magical powers and/or serving the ancient gods or other mythic figures. For example, the Norse god Odin was purported to have had a pair of ravens that served him in this manner.

Truth in Television is very much in effect here; corvids have been a common subject of scientific research because of their intelligence, and the various findings gathered over the years implicate them as one of the smartest nonhuman, nonprimate, and nomammalian animals in the world, being around as smart as a seven-year-old human child. Among other things, they're adept tool users, understand liquid displacement, can recognize faces, and are capable of creative thinking and social empathy (the latter meaning they can understand what others are thinking in a given situation, why they act the way they do, and what connections they have to other beings or objects).

For tropes about another intelligent and sometimes mischievous bird, see Polly Wants a Microphone, Fowl-Mouthed Parrot, and Not in Front of the Parrot. For a similar trope with less basis in reality, see The Owl-Knowing One. For less benevolent corvids, compare Creepy Crows. Idiot Crows, despite the name, is not this trope inverted, but an anime gag involving crows calling you an idiot.