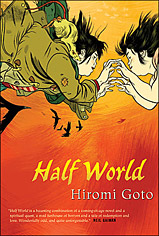 Half World by Hiromi Goto is a Down the Rabbit Hole Coming of Age Story, released in 2009.

There are three realms: the Realm of Flesh (the living world), the Realm of Spirit (afterlife), and Half World (a sort of purgatory where dead souls work out their traumas until they are ready to pass to the Realm of the Spirit). The realms were originally together, cycling in harmony, but got separated somehow. Now each realm is isolated, locked in perpetual suffering. When Melanie is born impossibly into Half World her mother flees to the Realm of Flesh to raise her. After fourteen years, her mother gets kidnapped by the sinister Mr. Glueskin, and Melanie goes on a quest to Half World to save her and the world.

In 2012 a sequel called Darkest Light was released, continuing sixteen years after the first book. The protagonist themselves is a huge spoiler for Half World, so be prepared for unmarked spoilers.

Tropes shared in both books