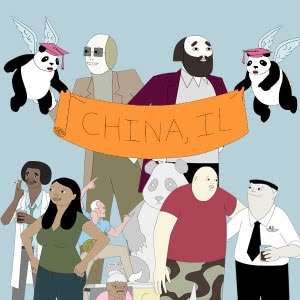 I see you at UCI.
"Well, there's somethin' I been meaning to tell you,
'bout the college on the edge of the town:
No one should ever go there,
You know it's bad, bad, bad
It gets worse every school year
But man, the freakin' teachers are rad..."
Advertisement:

Brad Neely's China, IL is an animated series that ran on Adult Swim from 2011 to 2015, adapted from a 4-part series of 3-minute shorts that aired on the channel in 2008. Both star Neely's long-running characters of The Professor Brothers Frank and Steve & Baby Cakes, all of whom he personally voices.

The series follows the misadventures and strange goings-on at the University of China, Illinois, proudly dubbed 'the worst school in America'. Brothers Frank and Steve Smith, the two history professors at the campus, are regularly joined by their TA, Pony Merks and perennial student/confidant/drinking buddy Mark "Baby" Cakes as they deal with such frustrations as relationships with their students (in more ways than one) and confronting such eccentric side characters as their impossibly macho Dean (voiced by Hulk Hogan) and China's Strawman Christian Mayor (who is equally macho), along with the occasional gay ghost, time-traveling ex-president, and colossal, murderous baby.

While the original shorts were created in Neely's trademark motion comic style, the series is his first project to be fully animated, allowing for more fast-paced comedic acting similar to that of Super Jail alongside with Neely's usual brand of humor.