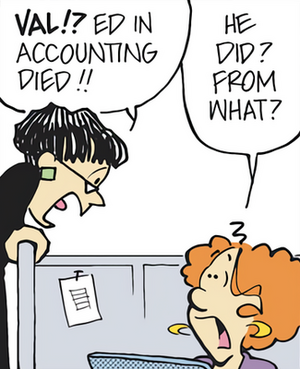 "Nothing good has ever followed the phrase 'Bernard in Accounting'"
— Captain Carter, What If...? (2021)
Advertisement:

Whenever a throwaway character in a Work Com is introduced, they will often be labeled as someone from the "Accounting department", usually to serve as the straight-man for a joke. The character's name will also tend to be common and monosyllabic, such as "Bob", "Bill", "Ted", or "Steve", altogether creating an impression of a staid and two-dimensional person.

Sometimes the person will betray this impression and be wacky or very unusual in some way, creating humor via contrast. (Their name may be dropped, but we never see their quirky antics.) Alternatively, the person may be from human resources or some other department that most companies have, especially one not known for its personality.

Once their function in the joke has been fulfilled, they will usually never be mentioned again.