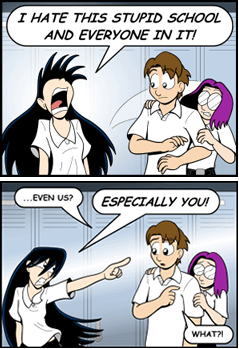 Leela: We have to keep our Secret Identities secret!
Fry: From everybody?!
Leela: Especially from everybody!
— Futurama
Advertisement:

Especially Zoidberg refers to when one character makes an absolute statement, to which another character replies, "Even X?" The inevitable response will be "Especially X."

Sometimes X can be an obvious exception, and sometimes X can be someone of great importance to the character who asks about them. In the second case, it is typically the villain who gloats, "Especially Fred/ Your Mom /Mr. Chuckles."

Compare and contrast My Friends... and Zoidberg.