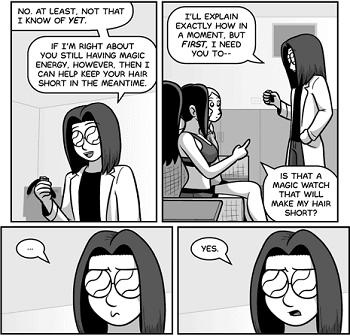 "Because science, whatever. I'm done expositing. You've taken the joy out of it."
Chris: There are only seven marshmallows on this plate. When I call your name, come up and claim your marshmallow. The camper—
Gwen: [quickly] Who does not receive a marshmallow must immediately return to the "Dock of Shame", catch the "Boat of Losers" and leave. Can't we just get this over with?
Chris: Fine. Whatever. Spoil the moment.
— Total Drama Island, "Paintball Deer Hunter"
Advertisement:

Exposition is used to give information to the characters, along with the audience, on what's going on. One way to give exposition is by having a character explain it, usually by Mr. Exposition. But when the character is about to start explaining things, they don't get the opportunity do it because someone else does it for them. When this happens, they will get annoyed or be disappointed because they wanted to explain it.

There are several reasons why the expositor would get frustrated if this happens to them. The character probably did a lot of research on a certain subject and is ready to reveal what they discover only to find out that it was All for Nothing since someone else already has knowledge of the subject. The character knows how shocking and amazing the information is that they want to be the one to reveal it to surprise everyone, only to be disappointed that someone else beats them to it. The character is Mr. Exposition and their purpose is to explain things, but when someone does their job for them, they would get irritated because if someone already explains it then what exactly is their purpose then? They might also feel embarrass if the information they were about to give may be inaccurate, they're just stating the obvious, or Everybody Knew Already. Whatever the case, the expositor should have some kind of reaction when someone takes over for them.

This may backfire on the character who takes over for the expositor because while they may know what's going on, they may not have all the facts and details on the subject and expositor will just assume since they know everything they probably don't want to hear what more they have to say. The expositor may come back later in the story to explain the missing details. Regardless of who gives the exposition, the audience is still informed on what's going on.

Compare As You Know and Everybody Knew Already.

In "Family Time", Francine immediately realizes what Dr. Weitzman's plan is and explains it to the family, leaving Weitzman annoyed because he was going to explain it.

In "Family Time", Francine immediately realizes what Dr. Weitzman's plan is and explains it to the family, leaving Weitzman annoyed because he was going to explain it.