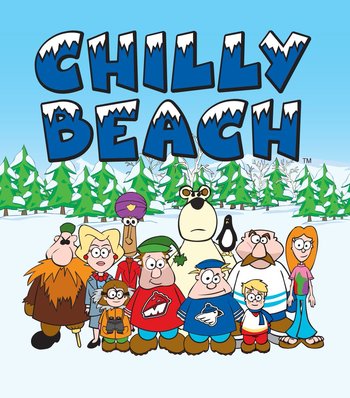 Chilly Beach is a Canadian animated series produced by March Entertainment (Dex Hamilton: Alien Entomologist, Yam Roll) and created by Daniel Hawes and Doug Sinclair that aired on CBC. Originally conceived as an animated Flash site on the web, it was developed into a full series that ran from 2003 to 2006 with 65 episodes produced over 3 seasons. The show also aired in Australia on The Comedy Channel and eventually came to the United States in 2011 on Hulu.

Chilly Beach is set in the Quirky Town of the same name, which also happens to be located on a large frozen island in the Canadian Arctic. The show's central character is Dale MacDonald, a fat, dimwitted hockey enthusiast and Zamboni driver whose best friend is Frank Schackleford, a part-time scientific genius who despite holding a PhD in physics, chooses to manage a beer store instead. Together, the two get into all sorts of strange shenanigans often involving the Eccentric Townsfolk they live alongside, including unhygienic Greasy Spoon owner Jacques LaRock, Dale's Granola Girl love interest April June, Violent Glaswegian trapper Angus MacAuger, disgruntled American ambassador Katherine Hilderbrand, and Indo-Canadian Mountie Constable Al. Oh, and there's a talking polar bear who frequently tries to eat them.

Described by the producers as a show about "a bunch of Canadians doing the stuff that Canadians do, like playing hockey, drinking beer, and being eaten by polar bears", Chilly Beach is a satirical and comedic look at Canada and how others perceive the country. Two films based on the series were produced and released to DVD in 2008. The first is Chilly Beach: The World is Hot Enough and the second is Chilly Beach: The Canadian President.