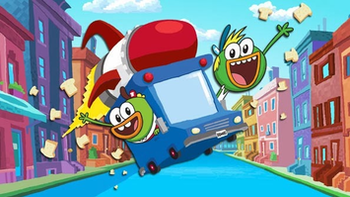 Breadwinners is an animated series on Nickelodeon that stars two anthropomorphic ducks named SwaySway and Buhdeuce as they deliver bread in their jet-powered Rocket Van on their home planet of Pondgea, created by former MAD writers Gary "Doodles" DiRaffale and Steve Borst.

Yeah, it's that kind of show.

as part of its inaugural Animated Shorts Program, then picked it up for a 20-episode first season premiering on February 17, 2014. The show continued to air for over a year, after which it was pulled from the main network. Breadwinners moved to Nicktoons for its last eleven episodes, which finished airing on August 22, 2016.

Has nothing to do with a novel about Afghanistan in the 1990s or its animated adaptation.

Get some Tropes up IN YO BEAK!:

SwaySway and Buhduece get angry when they ruin their stuff.

SwaySway and Buhduece get angry when they ruin their stuff.