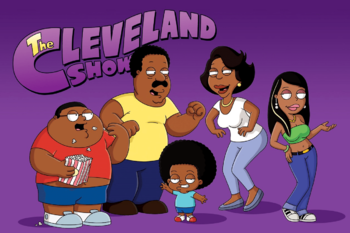 "My name is Cleveland Brown, and I am proud to be
Right back in my hometown, with my new family
There’s old friends and new friends, and even a bear
Through good times and bad times, it’s true love we share
And so I found a place, where everyone will know
My happy mustached face, this is THE CLEVELAND SHOW!" *giggle*
Advertisement:

The Cleveland Show was a Family Guy Spin-Off starring bit character Cleveland Brown. The show followed Cleveland's new life in his hometown in Virginia as he remarried his old flame Donna and settled down to raise his own child, Cleveland Jr., now a morbidly obese, shy boy, and his two stepchildren, teenager Roberta and five-year-old Rallo.

It took place in the same universe as Family Guy and the characters crossed paths on occasion, but like American Dad!, the series gradually stepped out of the shadow of its predecessors to find its own brand of humor, developing the title character as far more sympathetic than the other leads and using a more subtle comic style throughout.

The series was launched in September 2009 and was renewed for a second season before the first episode had even aired, supposedly due to positive reaction to a deliberately leaked pilot. However, it was cancelled after the fourth season finished airing in 2013, making it the first Seth MacFarlane-penned show that went down with no hope for a revival.

The Cleveland Show contains examples of:

"Paying a Young Boy For Sex"

"Paying a Young Boy For Sex"