Making Use of the Twin 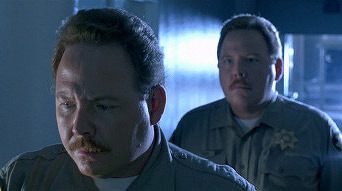 Watch out, Don Stanton. Your twin brother's coming up behind you.note On the left is Don Stanton as Lewis. In the background is Don's twin brother Dan playing the T-1000 mimicking Lewis.
Advertisement:

If you want to pull out some kind of Doppelgänger in an episode of TV, the ideal way to achieve it would, of course, be to bring in a whole other actor who just happens to look exactly like the actor you're duplicating. Unfortunately, actors typically don't have identical twins hanging around.

But hey, sometimes they do! Twins have a certain advantage when it comes to getting in movies and TV. For one, child labor laws limit the amount of filming a kid can do in a single day. When you've used one kid to the daily quota, there's always the backup kid. This trope is practically the rule with babies since they obviously can't follow stage direction; one might be better at sitting still when they need him to, whereas the other might be a little better at interacting with others. Also, identical twins make excellent doubles, which works even if the twin isn't an actor.

The opposite of Playing Their Own Twin.