Film / Honey, I Blew Up the Kid 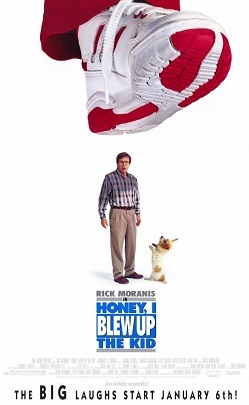 "It's not the first time something like this has happened ... to our family."
— Nick
Advertisement:

Honey, I Blew Up the Kid is the 1992 sequel to Honey, I Shrunk the Kids. It was directed by Randal Kleiser and the screenplay was written by Garry Goodrow, Thom Eberhardt and Peter Elbling from a story by Goodrow. The film was released on July 17, 1992.

Five years after the events of the first film, Wayne Szalinski (Rick Moranis) has moved to Nevada with his family to help Sterling Labs develop an offshoot of his shrink-ray that will enlarge objects instead of shrinking them. His superior, Dr. Charles Hendrickson (John Shea), wants to kick him off the project due to his personal disdain for Wayne. While watching over his toddler son, Adam (Daniel and Joshua Shalikar), Wayne sneaks into Sterling Labs to find a way to solve the growth-ray's problems, which leads to him accidentally zapping Adam. Now having to deal with his increasingly growing son, Wayne and his family must find a way to get Adam back to normal size before he hurts himself or others.

Followed by Honey, We Shrunk Ourselves.

A toddler grown to giant size by the ray innocently destroying things.

A toddler grown to giant size by the ray innocently destroying things.