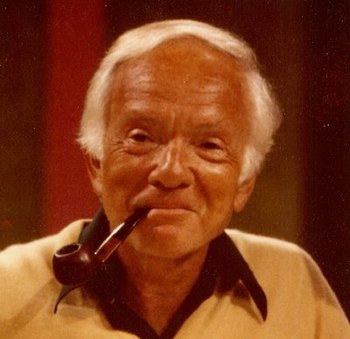 Mark Goodson, along with Bill Todman, produced some of the most iconic and long-lasting Game Shows in television history. After Todman's death on July 29, 1979, the "Goodson-Todman" moniker continued until about March 1984. Child's Play was the first game show to use the "Mark Goodson Productions" logo in 1982.

After Goodson's death in December 1992, the company was sold to All-American Television. In 1998, All-American was bought out by Pearson Television, which in turn was bought out in 2002 by Fremantle Media. The "Mark Goodson Productions" logo remained in use during this time, but was eventually removed on August 15, 2007 when Drew Carey became host of The Price Is Right.note (Well, not quite. Drew's first several taping sessions had continued using the Goodson logo and spiel, but was removed and replaced with ones for Fremantle. The reasoning is believed to be that someone from Fremantle popped in on a taping, noticed that they weren't saying the company's name, and ordered the change.) It was last seen on the October 12, 2007 repeat of Bob Barker's last show.

Also played the drums. And disco-danced in a custom-tailored Giorgio suit. No, seriously.

Shows and films originally produced by Goodson-Todman include:

open/close all folders
Radio
TV
Films
Yes, believe it or not, but they even briefly ventured into films.
Advertisement:
Unsold Pilots
Special mention should be made to Concentration, which was licensed to Goodson-Todman by NBC (1973-78, 1987-91; also did ten pilots in 1985). Because of NBC's refusal to do anything with the format or episodes, Concentration has never appeared in blooper specials - not even Game Show Moments Gone Bananas, a Fremantle-produced series of specials that dealt mostly with Goodson-Todman games.

Three lottery game shows which debuted after Goodson's death - Illinois Instant Riches (1994-98), Bonus Bonanza (1995-98), and Flamingo Fortune (1995-99) - originally used Mark's logo, as the company's lottery division still existed. All three shows eventually changed to the logo for Jonathan Goodson's company, but his credit was eventually ousted from Flamingo as well due to a format overhaul in 1997.