Series / I've Got a Secret 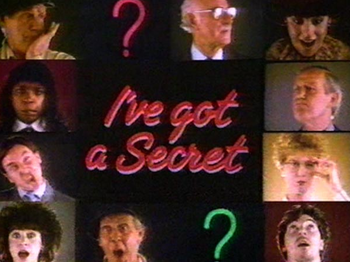 The opening sequence from the 1984-1988 UK BBC version.
"Hi, My name is [guest], and I've got a secret!"
— Standard teaser opening leading into the credits.
Advertisement:

Game Show from Mark Goodson-Bill Todman Productions, and basically a Retool of What's My Line?. Here, a person of some notoriety entered and gave his or her secret to the host, and the celebrity panel questioned them about it and tried to guess it. Each celeb had 15 seconds to question and/or guess the secret. Each stumped panelist earned the contestant money, and a full stump included bonus money. Celebrity guests with secrets were common.

The "regular" panelists on the CBS run were Bill Cullen, Henry Morgan, Jayne Meadows, Faye Emerson, Betsy Palmer and Bess Myerson. Meadows and Emerson, who debuted in 1952 and 1953 respectively, were replaced by Palmer and Myerson in 1958; Cullen and Morgan debuted in 1952 and stayed until the end of the run. Guest panelists would fill in on occasion for the regulars.