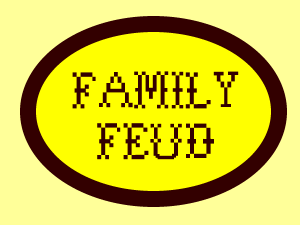 A generic, digitally-drawn representation of the original Family Feud logo, seen in various color schemes from 1976-95.
"When watching Family Feud, it’s a safe bet that you can guess the number one answer with 33% accuracy before you even hear the question. If it’s not breasts, it’s penis or testicles. Of course, you’re not supposed to think of those naughty answers, wink wink, given innocuous questions like, 'Name a reason a man may have trouble paying attention when talking to a woman' or 'Name a famous one-eyed monster.'"
— WrestleCrap, "TNA on Family Feud"

Family Feud is a Game Show from Mark Goodson Productions in which two families compete to guess the most popular answers to survey questions. Richard Dawson was the original host when the show debuted on ABC with Paul Alter as director of the show. The original version began in 1976, with a concurrent syndication run starting up a year later; both ended in 1985 within a month of each other.

Ray Combs was the host of the first Family Feud revival on CBS and in syndication starting in 1988. The CBS show was renamed Family Feud Challenge in 1992, with the syndicated version being renamed New Family Feud later that year. While a ratings success, Combs never quite caught on with fans and critics like Dawson did, so when ratings dipped (and the show started bringing on B/C-List celebrities and professional wrestlers as contestants as a gimmick) Combs was fired and Dawson came back for one last season before the show was mercifully removed from the airwaves. It was revived again in 1999, and has had four hosts so far: Louie Anderson, Richard Karn, John O'Hurley and current host Steve Harvey. This version has managed to outlast the original.

Served as the finale to Game$how Marathon, hosted by Ricki Lake, in 2006. Interestingly, though the series aired on CBS (where Ray Combs' version had aired), the focus was instead on the 1976-85 versions hosted by Richard Dawson. A replica of that era's set was built, with the survey board accidentally being built upside-down.

There was also a very short-lived Celebrity Family Feud hosted by Al Roker during 2008, but started off on a farcical note with an bleeped-out answer that became a precursor to the Steve Harvey era's raunchy contestant responses, and another one of the matches, involving the cast of My Name Is Earl, was very clearly staged in character and loaded with in-joke idiocy— unsurprisingly, that version of the Feud sank like a stone. ABC aired a revival of the format for its summer 2015 line-up, this time with Steve Harvey on board, which more or less guaranteed much better ratings this time around; it returned for the summer of 2016 as part of ABC's new "Sunday Fun & Games" block, alongside New York-based reboots of The $100,000 Pyramid (with Michael Strahan) and Match Game (with Alec Baldwin).

The show spawned a popular British version as well, renamed Family Fortunes. Hosted by Bob Monkhouse (1980-83), Max Bygraves (1983-85), Les Dennis (1987-2002) Andy Collins (2002) and Vernon Kay (2006-present). There has also been an Australian version, with several hosts from 1977-1996, then hosted by Bert Newton for the 2006-7 version and Grant Denyer from 2014 onwards. It also inspired a Mexican version named "100 mexicanos dijeron". (A 100 Mexicans Said). There's a successful Russian version as well, called "Сто к одному" (literally "100 by 1"), first aired in 1995 and still being produced. The main difference is that teams don't have to be families, often they're made of friends, coworkers or there are two music bands competing. Studio designs have been upgraded a few times, but the host (Alexander Gurevich) has never changed since the first game.

Combs and Dawson died 16 years apart to the day: Combs in 1996 from suicide, and Dawson from esophageal cancer.

Not to be confused with Feuding Families, which is a trope about families...feuding.

"Who will win their bankroll? Let's find out as we play the Feud!":