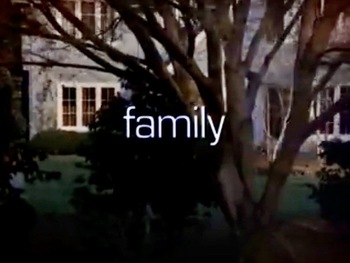 Family was an American drama series that ran for five seasons (1976–80) on ABC. Created by playwright/screenwriter Jay Presson Allen (a woman), the show boasted both Aaron Spelling and Mike Nichols as executive producers.

The Lawrences are a (mostly) happy, middle-class family living in Pasadena, California. The parents are Doug (James Broderick), a lawyer; and Kate (Sada Thompson), a homemaker who returns to college and becomes a music teacher in Season 4. Living with them are their younger two children: creative but unfocused son Willie (Gary Frank) and somewhat tomboyish younger daughter Letitia, aka "Buddy" (Kristy McNichol). The family dynamic is shaken up when elder daughter Nancy (Elayne Heilveil in the first season, Meredith Baxter thereafter) returns to Pasadena after catching her husband Jeff (John Rubinstein) in bed with another woman.

For the web series about polyamory, see WebVideo.Family.