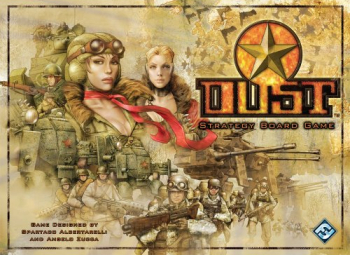 Dust is a series of tabletop games based on a comic by Paolo Parente. It is set in an alternate timeline: the year is 1947 and World War II continues with the aid of alien technology and a mysterious mineral called VK. The style is Weird War II and Diesel Punk, with some supernatural and superhero elements.

A Dust Roleplaying Game has also been published by Modiphius Entertainment and has a crossover with their Achtung! Cthulhu game.

The playable factions in the game are the Allies, the Axis and the Soviet Socialist Union (SSU).

These tabletop games provide examples of: