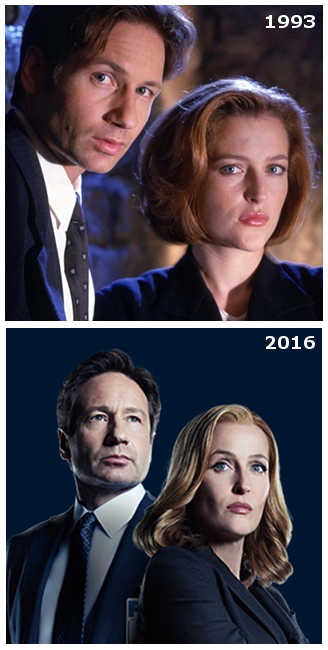 "Let me assure you fans of the old Price is Right that this is your favorite game still based on the pricing of merchandise with wonderful awards for smart shoppers. We call it The New Price is Right because we have some exciting new games that you'll enjoy right there at home with our Studio Audience, and we're going to get that first game going right now."
— Bob Barker on the first-ever episode of his version of The Price Is Right
Advertisement:

The show's so nice, they did it twice. Or thrice.

Pretty much every fan's dream is to see their beloved series return to the airwaves, and every once in a great while, it actually happens, occasionally as the reaction to a particularly successful Reunion Show.

The Revival differs from other forms of remake and adaptation in that it remains (more or less) in continuity with its predecessor. The show may differ in some substantial ways,note in fact, a Revival is often far more different from the original than a remake would be, particularly with regards to casting, but it is nonetheless a continuation of the original series, rather than a second attempt at visiting the same material. The revival is often confused with the continuity reboot, which generally wipes the slate clean and starts from the beginning with a different cast and crew.

A Revival differs from a Sequel Series in scale and in the passage of real-world time. It typically revisits the characters or their world some years later, and features occasional references back to events in the original series.note Ideally, these references are very occasional, as they tend to alienate new viewers. Referencing past continuity too often gives the new show the feel of Fan Wank. It is not strictly necessary for any of the original characters to return,note though this depends on the nature of the show: shows set in the "real world" typically need a character (or family) to link the incarnations, while in Speculative Fiction, the universe of the show can serve this purpose, but when they don't, you can usually count on one of them to return as a Special Guest, see Continuity Cameo. Often, a front-line character from the original series is now Older and Wiser, and promoted to the position of The Mentor.

The Revival is something of a crapshoot. When reviving a show, the makers have access to a ready-made audience, improving their odds of success. However, if the revival is too much like the original, (mostly unfavorable) comparisons to the original are inevitable, and they run the risk of being inaccessible or irrelevant to the new audiencenote after all, the show which spawned the revival had long-since died. Conversely, If the revival is too different, it alienates fans of the original, and there are few foes more formidable than an enraged fan-base. When it fails, it fails spectacularly. When it succeeds, it tends to last longer than the original, though it does not always attain the same cultural status. When a work makes fun of the concept, see Reboot Snark.

In Theatre "revival" has a slightly different meaning, closer to a straight remake. Any production that has not been performed in a significant amount of time and is brought back to the stage is called a revival - usually it will be recast, sometimes it will get bonus material added in the form of a new song or two, sometimes the production values of the show such as the set design will get a revamp. The Tony Awards give separate awards to revival productions including Best Revival of a Musical and Best Revival of a Play.

See also Un-Canceled, which is the restoration of the original, largely unchanged, as opposed to a new series based off the old. The differences are sometimes entirely behind-the-scenes. Compare After Show, which usually immediately succeeds the original show and typically involves at last a partial change in cast or setting. An Irregular Series might result from a revival, especially if it takes the form of sporadic TV movies rather than the original's regular release.

Reboot it, Renew it.

Reboot it, Renew it.