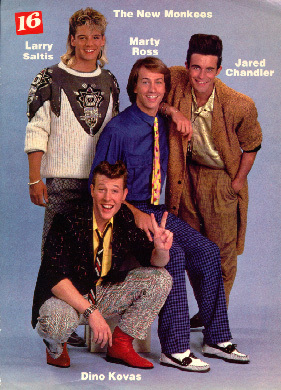 In 1986, The Monkees experienced a resurgence in popularity after MTV played a marathon of the group's TV series to celebrate their 20th anniversary. In response, Steve Blauner (who worked as an executive producer on the original show) set out to recreate The Monkees for the MTV era. After a highly publicized talent search, The New Monkees hit the air the following year.

The New Monkees features the titular band, who are Larry Saltis, Marty Ross, Jared Chandler, and Dino Kovas, sharing a large mansion with a wide range of inhabitants, including a butler named Manford and a computer A.I. named Helen. The show goes into their wacky adventures as they try to make it as a band. True to its predecessor, episodes featured two music videos.

The New Monkees was originally slated for a 22 episode season, but was pulled off the air after 13 due to low ratings.

The New Monkees contains examples of: