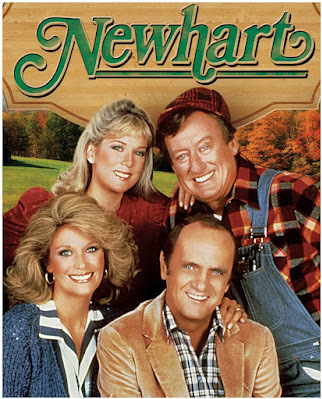 Newhart starred as Dick Loudon, a successful author of do-it-yourself and travel books, who along with his wife Joanna (Mary Frann) decided to move from New York City to a small town in Vermont, where they purchased and ran the 200-year-old Stratford Inn. Most of the comedy stemmed from Only Sane Man Dick's interactions with the various Eccentric Townsfolk, including George Utley (Tom Poston), the inn's addle-headed handyman; Kirk Devane (Steven Kampmann), a compulsive liar and the owner of the nearby Minuteman Café; and Leslie Vanderkellen (Jennifer Holmes), a wealthy heiress and Dartmouth student who worked as a maid for the inn.

The first season aired to solid but not sensational ratings, but at first reviewers didn't think the show had much going for it outside of Newhart himself. Newhart and creator and executive producer Barry Kemp weren't completely happy either, so when the show was renewed, it was retooled somewhat: the show switched from harsh videotape to a warmer film production; Leslie was replaced as maid with her bitchy, self-absorbed cousin Stephanie (Julia Duffy); and, toward the end of Season 2, Dick was persuaded to host a local TV talk show, Vermont Today. Dick's involvement with the show and its producer, the vapid but manic Michael Harris (Peter Scolari), became a whole new source of humor, as did Michael's budding romance with Stephanie. Adding to the fun was a trio of zany backwoods brothers who purchased the Minuteman Café from Kirk: Larry (William Sanderson), his brother Darryl (Tony Papenfuss), and his other brother Darryl (John Voldstad); Larry did all of the talking, because neither of the Darryls ever spoke.note At least until the series finale.

In addition to being a consistently solid ratings performer (spending its first six seasons in the Nielsen Top 30, four of those in the Top 20, peaking at #12 in its first and fifth seasons), Newhart earned plenty of critical acclaim and a number of Emmy Award nominations. And the show will be forever remembered for the ending of its final episode, which revealed its entire eight-year run to have been an extended nightmare dreamt by Dr. Bob Hartley of The Bob Newhart Show (to which this series might therefore be retroactively viewed as a kind of Stealth Sequel). Some have also seen Newhart, with its premise of a straitlaced urban protagonist finding himself a Fish out of Water in an often-absurdist version of rural America, as an '80s answer to Green Acres.

Bob: Well, I was an innkeeper in this crazy little town in Vermont. Nothing made sense in this place. I mean, the maid was an heiress. Her husband talked in alliteration. The handyman kept missing the point of things. And then there were these three woodsmen, but only one of them talked.
Emily: That settles it. No more Japanese food before you go to bed.
Feedback