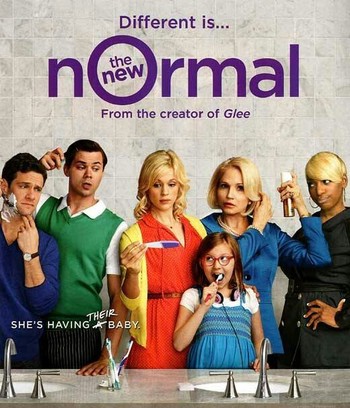 The New Normal is a comedy show which ran for one season in 2012 and 2013. It was created by Ryan Murphy and Ali Adler, and starred Andrew Rannells, Justin Bartha, Ellen Barkin, NeNe Leakes and Georgia King.

The story is about an affluent Los Angeles gay couple: Bryan, a co-creator and showrunner of a musical teen show called 'Sing', and David, a gynecologist, who decide to have a baby through a surrogate, Goldie. Goldie has come to LA all the way from Ohio with her daughter Shania, in order to give them both a better life. They were followed by Goldie's incredibly bigoted grandmother, Jane.