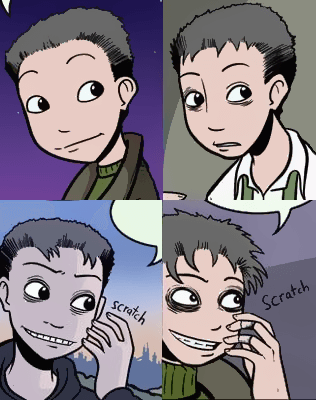 Get some sleep, Jack.
"Now, madness, as you know, is... like gravity. All it takes is a little push!"
— The Joker, The Dark Knight
Advertisement:

A character has been a bit ... off for a while now. Maybe they just haven't been themselves, maybe they've been struggling with who or what they are, maybe they've gone as far as painting a Room Full of Crazy while reciting a Madness Mantra, or maybe they've gone through a Madness Makeover, but it's apparent from their actions that their rational mind is losing its grip and they are sliding inch by inch toward insanity.

The end result of this varies, depending on the tone of the series and who the character is. If the series is dark and edgy, they may go on a murderous rampage. On the other hand, if it's light and soft, it may just be Played for Laughs, becoming a source for their hilarious dialogue and wacky plans. A villain is likely to have a Villainous Breakdown resulting in Karmic Death, while a hero will just have a Heroic BSoD and then get better.

Occasionally, a character will be seen holding back their insanity and generally keeping it in check, until that final straw breaks the camel's back and they finally snap, having a massive Freak Out.

And most rarely, the Sanity Slippage is the effect of being Gaslighted by a villain.

A common way to demonstrate this process is Mundane Horror: when some weird and unsettling details appear in everyday life, this may be the first sign that a character is losing his grasp on reality.

A Super-Trope to Sanity Slippage Song.

Compare Go Mad from the Revelation, Freak Out, Villainous Breakdown, Room Full of Crazy, Madness Mantra, Laughing Mad, Driven to Madness and With Great Power Comes Great Insanity. If this is a backstory it's Pre-Insanity Reveal. Compare Slowly Slipping Into Evil. The opposite of Sanity Strengthening.