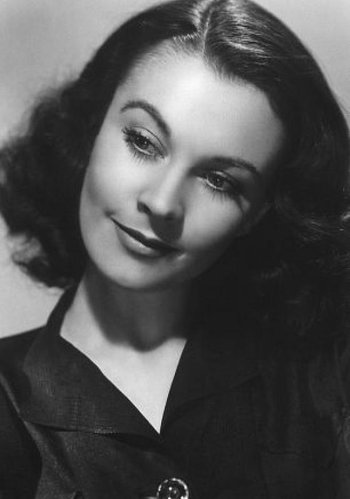 "I'm not a film star, I am an actress. Being a film star is such a false life, lived for fake values and for publicity."
Advertisement:

Vivien Leigh, born Vivian Mary Hartley (5 November 1913 – 8 July 1967) was an English stage and film actress. She is best known for her performances as southern belles as Scarlett O'Hara in Gone with the Wind and Blanche DuBois in the film version of A Streetcar Named Desire, winning the Best Actress Academy Award for both.

Leigh began her film career with Fire Over England in 1937. She was later chosen by Hollywood to be leading lady Scarlett O'Hara in Gone with the Wind, and this performance made her become an American household name almost immediately. Despite the new hype and fame, she made a few appearances in films and mostly acted in theatre. In 1951, she starred alongside Marlon Brando in A Streetcar Named Desire, which brought her back into the hype and critical praise that Scarlett O'Hara had given her years before. Both star making roles gave her some controversy, mostly because she was a Fake American who had played iconic characters in American literature, which was a slight problem for her to appear in films after these performances without being type-casted as one or suffering from I Am Not Spock.

She didn't quite have the lengthy resumé other stars of her era did. This can be attributed health issues, both mental and physical. She suffered from both bipolar disorder (back then diagnosed as "manic-depression") and depression in a time when mental illness wasn't well-understood. Her mental illnesses often led to strained relationships with film crews and bipolar episodes behind the scenes, earning her a reputation as being an actor who was difficult to work with. She also caught tuberculosis during the war and had recurrent flare-ups, leaving her bedridden and leading to an early death.

As well as her Southern Belle films, Leigh is remembered for her marriage to her second husband Laurence Olivier. The two of them frequently appeared together on stage (some directed by Olivier) and in three films. The marriage lasted for at least 20 years and was often strained because of Leigh's mental health. When Olivier was knighted in 1947, Leigh became Lady Olivier and was referred to this even after they divorced in 1960. Leigh died in 1967 from chronic tuberculosis at 53 years old.

Not related to Janet Leigh, who also used "Leigh" as a stage name.