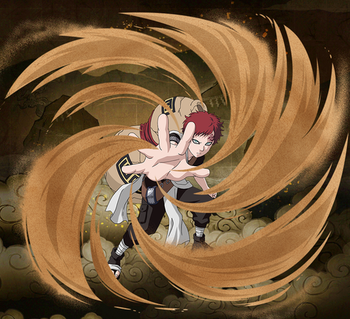 Don't ask him to bring you a dream.
Advertisement:

A character has power over sand, allowing them to create or control the substance. It notably differs from Dishing Out Dirt in that it only allows one to affect sand, meaning they're not going to be throwing around boulders or causing avalanches and earthquakes. Not that this means the power is useless in comparison. On the contrary, it can be used to be just as powerful as standard earth powers and often even quicker.

Expect users or abilities such as this to be associated with deserts in some fashion. A Handful for an Eye may be one of their tactics. Sub-Trope of Single Substance Manipulation. Also compare Blow You Away and Sentient Sands. This may or may not include The Power of Glass eventually, considering that sand is the main component of glass.

Having eaten the sand-sand fruit, Crocodile is literally made of sand, giving him a massive advantage when fighting in the desert.

Having eaten the sand-sand fruit, Crocodile is literally made of sand, giving him a massive advantage when fighting in the desert.