Powers Do the Fighting 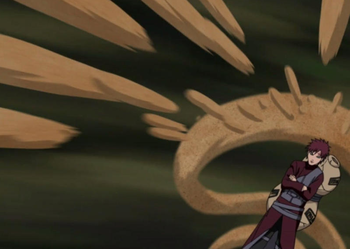 When your Ass-Kicking Pose is an armfold, you know you're a badass.
Advertisement:

This is when a character goes to almost no physical effort during combat, instead letting his magic or powers fight for him, usually resulting in several low-grade henchmen exploding, melting, disintegrating, being erased from existence, or any of the above without him so much as lifting a finger. No Magical Gesture, Blasting Time, Pstandard Psychic Pstance, or any of that silly "Look, he's doing a magic thing!" crap are involved here; the character's powers speak for themselves. Any actual gesture, movement, or other indicators that he is employing them at the moment will be very subtle at most.

Often, this is used to show how powerful the character is via The Law of Diminishing Defensive Effort. Your bullets stop cold and drop to the floor while he engages in Casual Danger Dialogue. Your Kamehame Hadoken bounces off his Beehive Barrier, which then turns into a swarm of actual bees. Followed by him putting you into a Psychic Strangle.

However, it can also be a case of Squishy Wizard or Disability Superpower, where the character is simply incapable of physically fighting, and Psychic Powers are all he's got. Getting this character to dodge or otherwise physically defend himself generally triggers either Villain Respect for his Worthy Opponent, or "I'll Kill You!!" and an Unstoppable Rage. (Although this is usually the point where the character turns out to be more stoppable than previously indicated.) And woe betide them if they lost access to their powers, whether temporarily or permanently; if they don't have any kind of backup (such as martial arts skills or weapons, or people who could help them), they're basically screwed.

A character can appear to do this when using Super Speed to physically run up and punch you or pluck thrown items out of the air in the blink of an eye, or using Time Stands Still through being a Time Master. Figuring out the difference will be key to defeating them.

Compare Long-Range Fighter who may or may not still have to move a lot and focus on the target, and "Instant Death" Radius when this is taken to the extreme. Sometimes overlaps with Thought-Controlled Power, but not all examples here are thought-controlled. Fighting Spirit is a Sub-Trope where the powers manifest themselves in a physical form, but still fight in place of the user.

Contrast Full-Contact Magic where gestures are more than needed. Also contrast Fights Like a Normal, where someone with powers fights as though they do not; one could say it is the inverse of this trope.

See also: Antagonist Abilities. This trope is the highest tier of The Law of Power Proportionate to Effort. For characters that possess great amounts of raw power but lack any actual normal fighting skills, see Unskilled, but Strong.

Unlike the rest of his "siblings", Ebony Maw forgoes weapons and direct combat in favor of using his psychic powers to fight for him.

Unlike the rest of his "siblings", Ebony Maw forgoes weapons and direct combat in favor of using his psychic powers to fight for him.