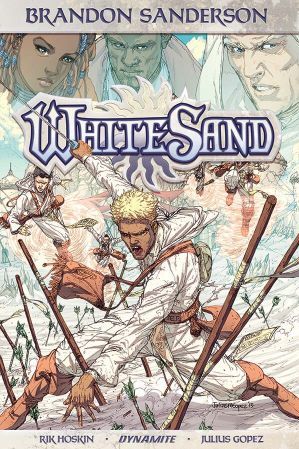 White Sand is a graphic novel created by Brandon Sanderson and Dynamite Comics. It's part of Sanderson's The Cosmere 'verse and the first Cosmere work not to be a prose work. As a matter of fact, White Sand was originally written as a book (and can be obtained via email) and was supposed to be released as one, but when Dynamite asked Sanderson if he wouldn't like to adapt any of his unpublished works, White Sand was remade as a graphic novel instead. It was released in three parts.

Taldain is a Tidally Locked Planet, stuck between a bright star that produces light and a dark star glowing with UV radiation. On the Dayside, the sunlight imbues the sand with magic properties. This enables a group of people called Sand Masters to control it and form it on grand scale, although the sand used this way turns dark until the sun "refuels" it again. One of those Sand Masters is Kenton, who just happens to be the weakest of them - which is slightly embarrassing, seeing how his father is one of the most powerful Sand Masters and the commander of the entire order. Kenton soldiers on, though.

However, not all is fine. The Sand Masters are ambushed and slaughtered, and Kenton's apparently the sole survivor of the massacre. Teaming up with a mysterious Darksider Khriss and her entourage, he sets out to uncover who orchestrated this attack on his kinsman - and escape before the enemy can finish the job.