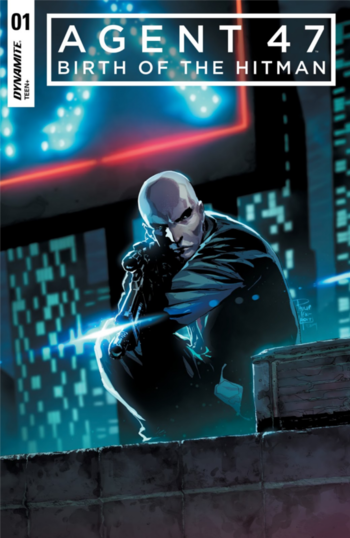 The Birth of the Hitman...and Diana.
Advertisement:

Agent 47: Birth of the Hitman is a prequel comic book miniseries for the hit stealth video game franchise; Hitman, a series of third-person stealth action games by Danish developer IO Interactive. The comic book series was released on November 1st, 2017, published by Dynamite Comics, and focuses on the young 47, fellow clone 6, and his soon-to-be handler, Diana Burnwood, and their separate exploits before they joined the ICA; the International Contracts Association.

The comic book series wrapped up on June 20th, 2018, a few months before Hitman 2 came out, in which this comics' events are acknowledged and referenced several times, and it clarifies some of the events only alluded to by characters in Hitman (2016). This comic would be further referenced in Hitman 3 at least once in every level. As such, this comic series is the backbone for the story of what IO Interactive dubs the World of Assassination Trilogy, meaning this comic does have some Continuity Lockout involved.

An Omnibus edition that compiles all six issues into one book was released at the end of the run (and can be read for free if you have a Amazon Prime membership!), which fixed a few errors, as well as making a few color palette changes.

Character Tropes should go on this character page.

Despite the similar names, do not confuse it with the similarly titled Hitman (1993).

Warning: This comic book contains a MASSIVE Hitman 2 spoiler right at the start that makes talking about this comic series incredibly difficult without ruining the storyline of that game. The spoiler in question is unmarked here, so read on at your own risk!. Marked spoilers for Hitman 3 are also abound.