Lost in a Crowd 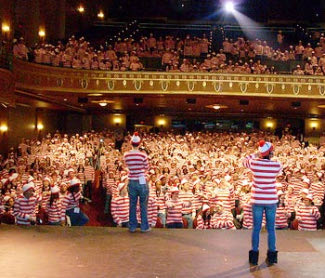 I FREAKIN' FOUND HIM!!
Advertisement:

For whatever reason, you find yourself being chased. You might have just pulled off the greatest heist in the history of crime. Or maybe you're an innocent man on the run, trying to prove you are innocent while dodging the cops trying to arrest you. You're dressed in a certain way, and some people who want to catch or kill you know you're dressed in a certain way. You can't change your clothing for some reason. So what do you do?

You dive into a crowd of people who are dressed exactly like you are. Hilarity Ensues. The people who are trying to get you don't know which is the real you, and start grabbing one fake after another. They tear their hair out in frustration while you casually wander away from the chase.

Sometimes, if you have a plan, you can arrange for the crowd of look-alikes to be there ahead of time. Sometimes, though, you just get lucky.

Compare and contrast with I Am Spartacus, wherein different people try to protect you by claiming they are you, but they don't necessarily look like you, and Needle in a Stack of Needles, which is this trope applied to objects.

Not to be confused with Alone in a Crowd. See also Mobstacle Course, when you're not trying to hide in a crowd so much as merely get through one in a hurry. See Ringer Ploy when identical looking characters are used to create confusion.

In Islamic settings, this can be accomplished by Hiding in a Hijab. In video games, this trope can be turned into a Blending-In Stealth Gameplay mechanic.