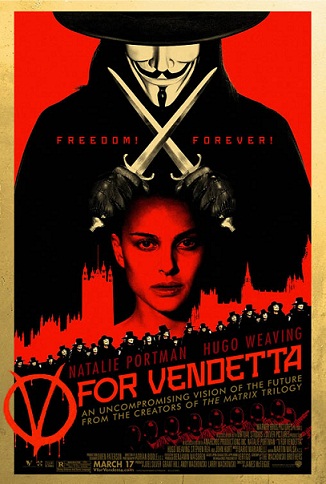 V for Vendetta is a 2006 film directed by James McTeigue and written and produced by The Wachowskis, based on the comic book of the same name by Alan Moore and David Lloyd.

The title character is V (Hugo Weaving), a government experiment Gone Horribly Wrong. Armed with extraordinary intellect and fighting skills, along with some home-made high explosives, he escapes from the facility that created him and sets about committing terrorist attacks against the fascist government of Britain. He is The Faceless throughout the film, wearing a Guy Fawkes mask in order to conceal his true identity. The fact that Guy Fawkes was arrested for trying to blow up the king has something to do with it, of course.

Evey Hammond (Natalie Portman), who works at a TV channel, is rescued from rapist policemen by V, and this act of kindness starts the film. She is taken to his Elaborate Underground Base, and, although scared by V at first, she decides to join his campaign to bring down the Government, replacing it with an anarchist society.

Where the original comic was influenced by Alan Moore's fears of Thatcherite Britain becoming a repressive dictatorship, the film owes more to critics of the second Bush administration along with several other changes with the characters and plot to condense the story and reconfigure it to resemble a more standard superhero tale, complete with super powers for V.

In 2017, there are reports of a TV adaptation being developed.

And as always, England prevails!
Feedback