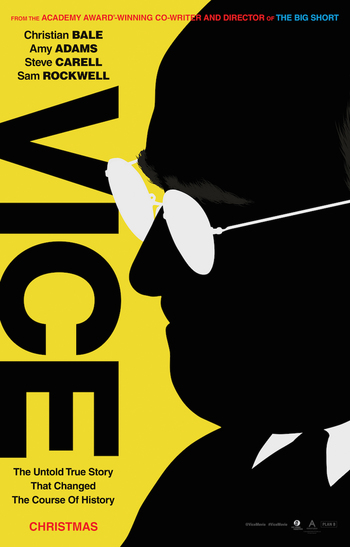 Vice is a 2018 Biopic about the 46th Vice President of the United States, Dick Cheney. Written and directed by Adam McKay, the film stars Christian Bale, Amy Adams, Steve Carell and Sam Rockwell, with narration by Jesse Plemons.

The film tracks Cheney's ascent from drunken college dropout to vice president of George W. Bush's administration, portraying the man as a quiet, calculating puppetmaster who artfully authored America's post-9/11 response behind the scenes with barely any popular support or approval. The film also examines his family life, including his relationships with his strong-willed wife Lynne and gay daughter Mary.

"Right hand to God
First in command
My testimony, when I take the Stand!"