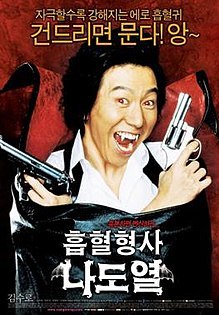 A Korean comedy about... a vampire cop. A mosquito in Romania bites a vampire, then goes to Korea and bites a local policeman, Na Do-yol. Subsequently, Do-yol develops vampire powers that awaken when he is sexually aroused, and decides to use them against the man who tried to kill his partner. Hilarity Ensues.