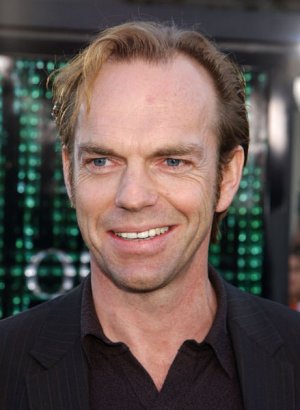 We've had our eye on you for quite some time now, Mr. Weaving...
"Initially I probably didn't even call it acting, but dressing up or something. As a kid I think you fully imagine the world in which you want to inhabit, so you put some clothes on and just kind of freely imagine this world, and it's a total imaginary world."
Advertisement:

Hugo Wallace Weaving (born 4 April 1960) is a Nigerian-born British-Australian actor best known for playing Agent Smith in The Matrix trilogy, Elrond in Peter Jackson's adaptation of The Lord of the Rings, V in V for Vendetta, Megatron in Transformers, and the Red Skull in the 2011 Captain America: The First Avenger, among others such as The Adventures of Priscilla, Queen of the Desert.

For Australians over a certain age, he will also be remembered for his portrayal of 1932-33 Ashes series English cricket captain Douglas Jardine in Bodyline, an Australian 1984 television miniseries dramatising the controversial season. A bit like Agent Smith in the 1930's, if he only despised Australian humans, and was only allowed to kill them with a cricket ball.

Undeniably One of Us, as he has said that the reason he played characters like Elrond and Agent Smith was to get action figures made out of his characters so he could make them fight each other. Nonetheless he has also expressed particular indifference to his roles as Megatron and the Red Skull, his contempt for the former character earning him hostility from Michael Bay who suggested he donate all his "Megatron" paychecks to an elephant charity.

His paternal niece, Samara Weaving, is an actress.