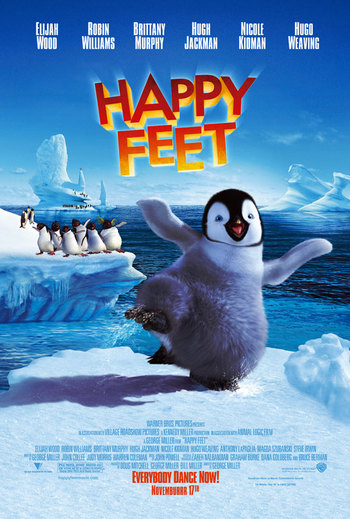 Get into the tap of things!
Advertisement:

Happy Feet is a CGI-animated film from 2006. It was the feature debut of animation studio Animal Logic and the first animated film to be directed by George Miller.

The protagonist of the film, a male emperor penguin named Mumble, cannot sing like all others of his colony, but he can tap dance. (Because his father Memphis dropped him as an egg, as he admits in an anguished public confession.) Separated from his colony, Mumble meets the Adelie Amigos, who later help him on a quest to get the fish back from "aliens" after the elders exile him from of the Emperor Penguin colony.

Happy Feet is notable for being one of the darker animated family films of The Millennium Age of Animation (not that the advertisements would have tipped you off) and is often compared favorably to Watership Down, both in its tone and the fact that it is shown entirely from an animal's point of view. It was also a groundbreaker in Motion Capture technology: while most of the character animation was done by animators, all of the dancing was mocapped from legendary tap dancer Savion Glover.

A sequel was released on November 18th, 2011. For tropes relating to that movie, see Happy Feet Two.

Baby Mumble pulls this on Memphis when asked to get under him and get warm.

Baby Mumble pulls this on Memphis when asked to get under him and get warm.