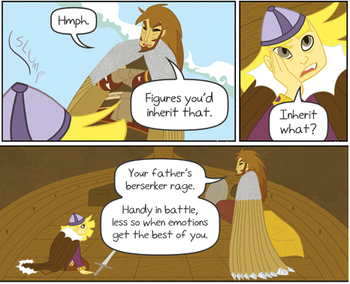 Characters appear to be able to inherit their parents' personalities, behaviour, and morality, in addition to their physical traits.

Genealogy and ancestry are really popular tropes in fiction. It makes a great Secret Legacy, a source of fraternal conflict, adds drama with an unexpected family reunion, and can set up a host of different conflicts and relationships. Just like in real life, a person's ancestry can determine their genes and, to a lesser extent, their personality, and even their talents, but in fiction, this extends to skills, superpowers, and even moral alignment.