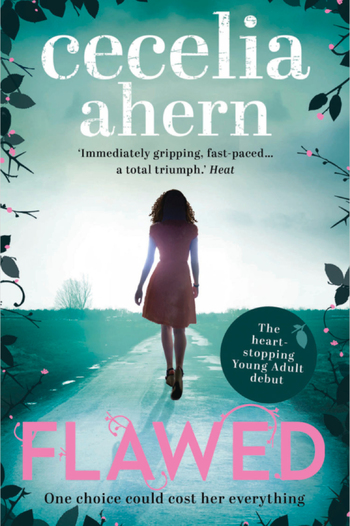 They are Flawed. Do not speak to them. Do not help them. Or you will be punished.
Advertisement:

Flawed, by Cecelia Ahern, is an American young-adult Dystopian novel published in 2016.

In a society where everyone is expected to be perfect, being flawed is quite literally a punishable act, complete with brandings and being treated as second-class citizens. Celestine North has always seen herself as the perfect model citizen, up to and including dating the son of Bosco Crevan, high-ranking judge of The Guild that persecutes and enforces rules against the Flawed.

Everything changes when she helps a Flawed old man on the bus, which is against Guild guidelines. Suddenly finding herself on trial for being flawed, Celestine has to deal with her life being turned upside down, suddenly considered imperfect. As she struggles with her new status in life, there is also an ongoing struggle with morality, with people questioning the very foundation of their "perfect" society.