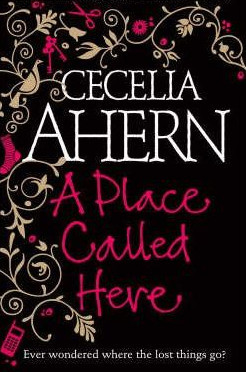 "Ever wondered where the lost things go?"
—Tagline
Advertisement:

A Place Called Here (published in the U.S. as There's No Place Like Here) is a 2006 book by Irish author Cecelia Ahern. It is based on the premise that every object or person that gets lost or missing, winds up in a certain other world, in this case simply called "Here".

Sandy Shortt has been obsessed with finding missing things and people since she was a child. As an adult, living in Dublin, she has turned this into her job: she is a private detective for finding missing people.

Jack Ruttle is a man living in a small Irish town, whose brother Donal has been missing for a year. His family by now have accepted this, but Jack insists on finding his brother. He hires Sandy to do so.

Before they get to meet however, Sandy goes missing herself. She winds up in the place/world where all missing things and people go to, which the people living there (people missing in/from the real world) just call "Here". Sandy goes to live in the community of Here's people, but reluctantly, as she desperately wants to get home to the real world. Then things suddenly start to get lost / disappear from Here, which Here's people find very unsettling because nothing has ever gotten lost from Here (as it is the place lost things turn up in, in itself...) They think this is connected to Sandy.

Meanwhile back in real world Ireland, Jack goes on a hunt to find the disappeared Sandy, while nobody believes she's missing.