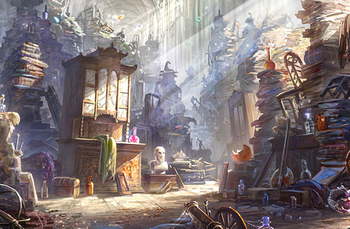 Hundreds of years worth of hidden magic...if you need something, you need only ask.
Image

)
Used with permission.
He was standing in a room the size of a large cathedral, whose high windows were sending shafts of light down upon what looked like a city with towering walls, built of what Harry knew must be objects hidden by generations of Hogwarts inhabitants. There were alleyways and roads bordered by teetering piles of broken and damaged furniture, stowed away, perhaps, to hide the evidence of mishandled magic, or else hidden by castle-proud house-elves. There were thousands and thousands of books, no doubt banned or graffitied or stolen. There were winged catapults and Fanged Frisbees, some still with enough life in them to hover halfheartedly over the mountains of other forbidden items; there were chipped bottles of congealed potions, hats, jewels, cloaks; there were what looked like dragon eggshells, corked bottles whose contents still shimmered evilly, several rusting swords, and a heavy, bloodstained axe.
— Harry Potter and the Half-Blood Prince
Advertisement:

You can't find it. It's gone. So, you forget about it. And then one day you get lost at sea, you wander too deep into the woods, your starship's hyperspace thingy malfunctions, or you just fall through a metaphorical crack in the sidewalk, and you end up discovering where all those missing socks go.

; the dimension into which lost things go. Amelia Earhart's over at the bar. The Lost Colony of Roanoke is next door. USS Cyclops? In the harbor. Elvis Presley? Who do you think is on stage? The Dead Sea Scrolls? Have a pamphlet. And everybody has all the socks they could possibly need. Just not matched ones.

This is a place everyone who's ever lost anything wished they could visit and that all treasure-hunters dream about; the multiverse's biggest attic/basement/toolshed. Everything is here. Starships, Ancient Artifacts, misfit toys. It's a Portal Crossroad World where it's easy to enter but significantly harder to leave. It's a Derelict Graveyard that people actually live in. It's a Landfill Beyond the Stars where the crap never stops gathering. It's everything you could possibly want mixed with all the stuff you hoped you'd never see again.

Appearance-wise, the places usually take the form of great spaces filled with endless mountains of haphazardly piled junk. More specialized examples may take more specific forms — a relatively common variant focuses on drawing in everything lost at sea, and typically resembles a stretch of the ocean filled with shipwrecks, flotsam, seaweed, and assorted nautical garbage. Characters who come to these places often do so in the hope of tracking down something specific or scavenging for useful, precious or interesting things; doing so, however, will typically require sorting and often digging through a much vaster quantity of worthless dross.

It tends to be fairly easy to end up here — although it may not always be easy to get here on purpose. There are generally any number of connections between the Super-Sargasso Sea and regular reality — you may get here through a portal, by being shipwrecked and cast adrift in an unusual patch of sea, by a malfunction in faster-than-light travel, teleportation or other method of transdimensional travel, or just by getting very, very lost yourself. Getting out, however, is usually a lot more difficult.

Often accessible via The Bermuda Triangle.

Not to be confused with Wide Sargasso Sea, a 1966 pastiche (but a classic nonetheless) of Jane Eyre following the life of the latter's resident Madwoman in the Attic.