When Phoebe admits she let Cole escape, a betrayed Prue and Piper must put their feelings aside to stop Prue's ex-boyfriend from becoming a demon. 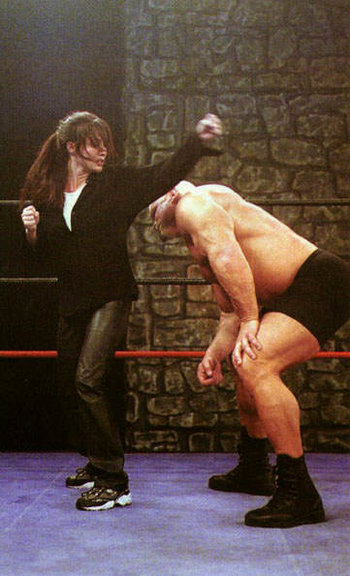 Darryl has a Mr. Chang at the police station. His picture has appeared on the front page of the paper's Metro section, and Darryl's gotten a tip that four others whose pictures have so appeared have been brutally murdered. What Darryl can't tell Chang is the source of his tip— a premonition from Phoebe. Chang declines protection and leaves.

Prue, Piper and Phoebe are waiting outside Darryl's office. Phoebe is unusually gung-ho about catching the demon she saw in her premonition, even though previously she hasn't been that interested in catching demons. After Darryl comes out of his office, the four split up to catch the demon. Prue and Darryl find Chang just as he's leaving work. As Chang gets on his motorcycle in an alley, a demon comes around the corner and throws a fireball at him. Prue deflects it back, and Darryl throws Chang out of the way. The demon gets ready to attack again, but Prue flings him into a trash bin. As she's about to finish the demon off, she recognizes him as a former boyfriend.Prue brings out a picture of her ex-boyfriend, Tom Peters, a star wide receiver and captain of the football team at Gold State when Prue was there. Darryl remembers that he had blown out his knee in his rookie year in the NFL, and he was rumored to be involved in gambling. He's been missing for six years. Leo orbs in and says he lost Patty's ring. Piper isn't happy; she wanted to use it as their wedding ring.

Prue asks Leo if it's possible for humans to turn into demons. Leo says he's heard rumors of mortals being rooked into a brutal training program by way of a Faustian Deal. Over time, the program destroys mortals' humanity and turns them into demons. They have to seal their conversion by killing an innocent.

Tom walks into the office of his business manager, Kellman. A guy is sitting there, asking for more time to pay a debt. Kellman won't listen, but instead gestures and an elevator appears in a wall. Kellman pushes the man into the elevator and he goes down rapidly. Tom comes in afterward and tells Kellman that a witch had interfered with his kill. Kellman isn't happy; he promised The Source five new graduates by the next night, and the four other members of Tom's class have already made their kills. He hands Tom a newspaper and tells him to kill the person pictured there.

Leo tells Phoebe that she has to tell Prue and Piper she let Cole go. Phoebe doesn't know how to tell them, but wants to atone by killing as many demons as possible. Phoebe tells Piper she might have a spell that could help find Tom. Phoebe goes to her room and pulls out a sheet of paper with a lost-and-found spell she wrote in hopes of finding Cole. Piper walks in, and Phoebe admits that Cole is still alive. She also admits her gung-ho attitude has largely been out of a guilty conscience. Piper, of course, is upset, and urges Phoebe to tell Prue.

Prue goes to Tom's mother and asks what happened after he got hurt. She denies that there were any gambling debts, and mentions Mr. Kellman has been a big help to her since Tom disappeared. Prue asks if she has any idea where Tom is, and his mother says that she thinks Tom had some "things to take care of".

Prue comes home just as Piper and Phoebe are casting the lost-and-found spell. She wonders how they came up with a ritual that quickly. Piper tries to get Phoebe to tell the truth, without success. The sisters find a newspaper on the doorstep, with all the pictures grayed except one on the front of the Metro section; it's Claudia Gibson, the mayor's spokeswoman. The sisters take off and overtake Tom; he throws a fireball at Claudia, but Piper freezes it in flight and Prue flings it aside. The sisters bring the still-frozen Tom to the manor and tie him up in the attic.

Prue finds the training program, known as the Demonic Academy, in the Book of Shadows. Tom will have six chevrons on his left arm if he is fully demonic; he has only five. Apparently, he won't get the sixth until he kills an innocent. Phoebe wants to vanquish him—something Piper doesn't understand, given how much she wanted to save Cole. Tom unfreezes, and throws a fireball at Prue when she tries to talk to him. The doorbell rings, but Prue assures Piper and Phoebe she can handle Tom alone.

Downstairs, the telephone continues to ring and the answering machine does not pick up. Darryl is at the door with Tom's missing persons file; as he enters, Grams's dog Rasputin, missing for seven years, runs in. Piper picks up the telephone and an old friend of Prue is on the line; Piper looks for a pencil and finds a whole drawer full of them, along with Mom's ring. Phoebe's hair has turned back to brown. A cabinet opens and dozens of socks tumble out.

Prue tries to reason with Tom. She tells him that she knows he entered into some kind of Faustian deal. He initially denies ever knowing her, or even having been human. However, he does show some sign of recognizing her when she tells him she knows he hasn't made his kill; he says Kellman will kill him if he doesn't. As Prue leaves, she loosens his ropes. Prue heads to the kitchen to find Piper, Phoebe and Darryl dealing with tons of previously lost stuff. Just then, Tom heads out the door— just as Prue hoped; she thinks he'll lead them to Kellman, whom she's convinced is the demonic recruiter. The sisters follow Tom to Kellman's office and kick the door in, but no one's there.

Down below, Tom tells Kellman he can deliver three witches. Kellman isn't impressed; he's more concerned about meeting the deadline. Kellman senses humanity in Tom; he thinks Tom needs a "refresher course". Kellman gestures and the lights turn on, revealing a wrestling ring.

The sisters are scouring Kellman's office. Apparently, Kellman's been posing as a sports agent, and has rooked several troubled athletes into Faustian deals, forcing them into the Academy. Phoebe tweaks the lost-and-found spell, revealing the elevator.

Kellman forces Tom to watch the large wrestler Slammer beat the tar out of an academy student; a hellhole opens in the mat and the smaller man falls in. Tom is next into the ring and fares little better. The sisters run toward the ring and call for Tom. Piper freezes most of the demons, but Tom, Kellman and Slammer don't freeze. Kellman tells the sisters that he's more than a match for them and to prove it, shows them eight chevrons on his arm, which also proves he was once human himself.

He raises a levitating ball blade to Tom's throat. Leo orbs into Darryl's office, to his irritation, and says he can't sense the sisters. Darryl tells Leo about Kellman and Leo abruptly orbs out, irritating Darryl further.

The sisters try to bargain with Kellman. Tom stands by his bargain. The ball-blade disappears, and Tom and Slammer leave the ring. Piper freezes Tom and bluffs, claiming that Tom will be permanently frozen if she is harmed. Kellman agrees to a bet: if the sisters win in the ring, Tom goes free, and if they lose, they die. Phoebe admits to Prue that she did not vanquish Cole, much to Prue's anger.

Kellman brings out two other large wrestlers, Megaman and Thunder. Phoebe and Prue enter the ring and they and their opponents circle each other. Prue lands the first blow with a double high-kick, but the demons quickly recover and take the advantage. Piper tries to encourage Prue and Phoebe to get angry; finally, Kellman calls her bluff and hits her with the ball-blade, unfreezing all the demons. Phoebe and Prue, distracted, begin to get the worst of the fight. Kellman takes Tom with him to kill Tom's mother. The hellhole begins to open under Prue and Phoebe. Prue, however, kicks Megaman away with her free leg and then kicks Thunder off of Phoebe. Phoebe swings Prue by one arm and Prue high-kicks the wrestlers in the head. They pin the wrestlers; the hellhole opens and the wrestlers fall in.

The sisters return up the elevator, carrying Piper, and call for Leo. Leo removes the ball-blade and starts healing Piper. Although Piper was badly wounded (she'd already stopped breathing), she'll survive. Leo tells the sisters that the Elders think that Kellman can be defeated by turning one of his recruits against him. Prue and Phoebe head out while Leo attends Piper.

In the lobby, Phoebe tries to explain to Prue that all she wanted was to save Cole just like Prue wants to save Tom. Prue, however, retorts that Tom wasn't out to kill them, like Cole was. Piper comes to, and tells Leo that she found her mother's ring.

Darryl brings Tom's mother to the manor. The manor is swarming with lost souls; Phoebe tweaked the lost-and-found spell to attract lost souls in hopes of luring Tom to the manor. Tom and Kellman enter and Kellman orders Tom to kill his mother. Tom hurls a Fireball, but Darryl tackles Tom's mother and the fireball misses. Prue flings Kellman into a wall. Kellman raises a ball-blade to the neck of Tom's mother and again orders Tom to kill her. Instead, he grabs the ball-blade and hurls it at Kellman, killing him. The lost souls swarm around Kellman. Phoebe says a quick spell to undo the lost-and-found spell, quietening the manor; Tom's chevrons disappear.Piper and Leo head out to dinner. Phoebe throws the lost-and-found spell into the fireplace. She admits to Prue that she made a mistake in not vanquishing Cole. Prue is still upset, she feels that Phoebe's lie endangered all of them.